My family moved to Washington State when I was 12.

Since then, I have lived in WA and CA. I even felt a couple minor quakes while living in the Bay Area.

I should have put together an emergency kit years — decades — ago, but I just never got around to it.

A few weeks ago, author Elizabeth Bear tweeted a link to a New Yorker article on the Big One.

It finally scared me into action.

If the Cascadia fault does bust all the way up to Washington, Port Angeles is going to be in deep trouble. If we make it through the initial quake, there will be a tsunami, and then if we survive that, the whole area will be such a mess that it might be a good long time before we get help.

So, properly motivated, I finally went through and put together an emergency kit. With Amazon’s help, I was able to get it done in an hour or so by starting with emergency radios and first aid kits, then looking at the “customers also bought” items.

I think this is a nice, solid basic emergency kit, suitable for anyone who is living in an area at risk of a large-scale disaster.

If you’re looking forward to put together a kit of your own, feel free to use this as a jumping off point!

My focus below is on a non-food emergency kit – but my friend Blair McGregor recently did a nice post on food preparedness.

Did I miss anything critical?

The most basic requirements have an asterisk; many of the others are nice to have, but not critical. 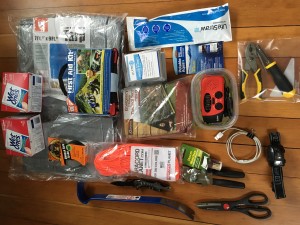 Not pictured. Ideally you would have enough for at least 3 days.

Human power pellets or a bunch of canned food . . . Whatever you can actually keep on hand and swap out as necessary.

If you have pets, include some food for them — or select canned food that either of you could eat.

If you want to be properly prepared with more than a few cans of food, here’s  a nice post on food preparedness.

This is partially covered under health (water treatment), but in an ideal world you would have actual containers with at least 3 days of water.

In an ideal world, you would have some layers, clothes, socks, etc. Take some things that you were planning to take to the thrift store, and stick it in your emergency kit instead. Ideally you would have such things in your car, anyway, so one cheater method is to stash a copy of your car key in your emergency kit, and just keep the clothes in the car. Of course, you better be sure that your car will be home if you are!

In an ideal world, you would have a packet of paperwork with copies of your identification, insurance, telephone numbers, etc.

You have your handy dandy kit. Now where are you going to keep it? I’m stashing mine in a shed, so that if the house falls down I can still get to it. Wherever you put it, imagine the structure in a heap of kindling. Could you still get to the kit in a pinch? If so, you’re good.

I broke my emergency kit into a compact kit of items that can just live in a plastic bin.

I’m keeping the food and water separate, since those are bulky, and need to be swapped out periodically.

Even if I get sloppy with the food and water, at least the gear will still be there! 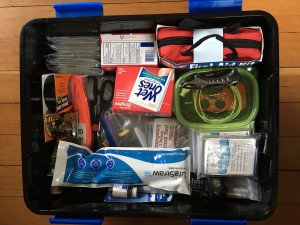 And if the big one does come . . . well, I’m going to owe Bear a lot of drinks for spurring me to get my act together.

Last time, I discussed some thoughts on cues and audience expectation.

Today, I want to look at an example where the cueing was poorly done, and resulted in disappointment for at least some audience members.

My target is Wing Commander.

When I saw this recently, it caught my eye as having a few instances of poor cueing — some of which made a difference, and some of which didn’t.

I am going to look at three examples of failed cueing in the movie. One is the innocuous sort of false cue that is almost inevitable in a complex work. The other two are more problematic.

When the MC and his best friend first arrive at their posting, they go and check out the fighters they’ll be flying. Almost immediately they see an attractive female — the first, as far as I can recall.

Rob made a crack about her clearly being the love interest, an opinion that I was inclined to agree with.

Of course, then we met the real love interest some twenty seconds later.

Cue Cause: Something unusual (a girl!), underscored by character attention.

Effect: Brief red herring about the love interest. A minor red herring that did not cause any disappointment when it turned out to be misleading.

Comments: This cueing misfire didn’t really hurt anything, although it didn’t really accomplish anything, either. If there is a good variety of characters all the way through, the storyline will be less vulnerable to such mis-cues, because the first girl (or POC or …) won’t stand out as different from the homogenous norm.

One of the major sources of tension through the middle of the movie is the MC’s Pilgrim association (he is half Pilgrim, which makes him the subject of suspicion by some of the crew members). Early on, he discusses his Pilgrim memento — an amulet roughly in the shape of a cross — with his best friend. His friend thinks he should get rid of it.

All well and good.

But then it is revealed that it has a little knife that can pop out of it.

It is a striking and suggestive detail.

We promptly decided that it would play a key role in the plot, probably in some sort of fight.

The amulet crops up again, but the little knife isn’t shown ever again. It doesn’t play a role, major or minor.

Effect: this engendered the expectation that the knife would show up later and be used for something cool. The lack thereof caused disappointment.

Comment: this detail registered as a cue rather than an enriching detail because it was unusual, it was not surrounded by other details of similar weight, and it was a detail that had clear application. The reason all of this is problematic is that the viewer is cheerfully waiting for the knife to come into play, and when it doesn’t, is disappointed. It’s sort of like putting a gun on the mantle, but never having it fired or used to hit someone over the head.

The MC’s best friend does some semi-competitive showing off with a girl.

The girl subsequently dies in an accident as a result of showing off.

All well and good.

But then there is a scene where the MC tells his love interest (who is also a officer) that she needs to make things right with the MC’s best friend, because she needs every fighter at her disposal.

This cued the expectation that the best friend would then play an important and likely redeeming role.

Cue Cause: an emotionally fraught scene where the MC’s love interest forgives the best friend because they’re about to go into battle.

Effect: this engendered the expectation that the MC’s best friend would play some sort of important or cool role, or — failing that — die spectacularly. It is somewhat ironic, because he did play an important role — but it was before the “clearing the air” scene with the MC’s love interest.

The issue with this is similar to the issue with the unused dagger: there was the expectation that something interesting would happen at the end, and it didn’t happen. With a really good climax that might not have been a problem, but Wing Commander had a relatively weak climax — so the cues relating to interesting things that never happened were far more noticeable.

Comment: if you’re going to make a big deal of needing someone, their success or failure should be important. They should somehow be relevant, whether they come through or not.

To just ignore the whole thing doesn’t hack it.

In this case, I think they were just tying off the sub-plot “hey, we can’t just leave the MC’s love interest mad at the MC’s best friend,” but it looked like it should relate back to the main plot. And it didn’t.

The two cueing failures that I consider problematic set up expectations for an exciting climax and resolution.

The ending turned out to be pretty lukewarm, so the cues stuck in my mind as missed opportunities.

1. Pay attention to the critical cues, and fulfill or subvert them.

2. Have such a splendid, satisfying climax that it blows away any recollection of what the audience expected.