It is now late July, and our remaining 2 goats are intact.

Unfortunately our remaining goats are the 2 boys – one big (a La Mancha) and one little (a Nigerian Dwarf).

From a compatibility standpoint, they’re the worst pair of survivors to have . . . But they seem to have adjusted reasonably well.

The only problem is that the big boy can’t play very well with the little boy, so then he’s overly frisky with us.

Once the fencing is done, we’ll see about getting a girl to keep the boys in line.

What the game warden recommended was high tensile electric fence.

The power of the fence doesn’t need to be any higher than what we had already, but the goal is for it to be tight and strong — so the cougar can’t just zip through.

High tensile electric fence is made with 12.5 gauge wire (annoyingly heavy-duty) cranked to 250 lbs of force.

The real problem is to support that kind of fence, you need really strong corner posts.

We have spent the last month and a half going through the steps to get H braces in place.

This setup involves bracing the corner post with a partner post a few feet away, with a pole holding them apart towards the top, and a cross wire pulling them together into a stable box.

It is, frankly, a huge pain.

The biggest issue was getting the holes done. Our soil is rocky, and even with an auger it took several hours to do the preliminary holes — and even longer to tidy them up and wrangle a few extra inches to get the full three foot depth.

Then we had to put 8 foot posts in the holes, level them, and fill in with concrete.

It was slow going, but we finally got the top braces in a couple days ago. 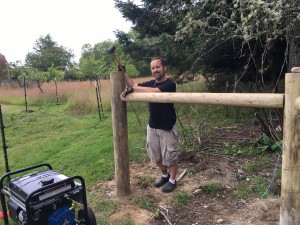 The next step will be the wire cross-lashing that will stabilize the box.

Of course, at that point we still won’t have a fence. We’ll have corners.

I am sorry to say that we did nothing.

After all, we had lived in our house for a year and a half without any problems. And the cougar didn’t get a square meal out of Bell, so maybe it would just roam on its way.

A couple weeks later, I went out to give the goats a treat, and Minnie was gone.

Not without a trace, though. All of the electric fence wires at one end of the pasture were broken, and there was a broad drag trail.

I followed the trail a little ways, but balked when it went into the woods. After all, Minnie was bigger than I was, and the cougar had taken her out just fine!

When Rob got home from work, he managed to find Minnie’s remains . . . Which was amazing, because the cougar had carefully buried her. It was sad, but also really impressive. I don’t think that a human could have done much better hiding a goat with duff and moss.

Can you spot the goat? 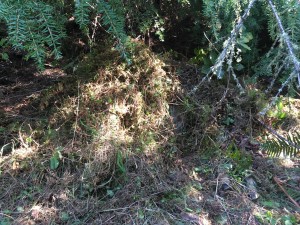 We didn’t notice it at the time, but a couple days later we realized that 8-Bit — the big boy — had a bite on his rear leg. The cougar must have gone for him first, failed, and then gone for Minnie.

The less said about giving antibiotics to goats, the better.

The game warden came out the next day. The first step was to put up a game cam and try to see what was what.

I had assumed it must be a big cat. It dragged Minnie a hundred yards, including through the brush.

The game warden told us about a cat that took out a 400 lb. calf. The cat was able to drag the calf to the fence, but then couldn’t get it over or under.

The game cam came up empty the next morning, but the morning after we had some fine pictures of the cougar. 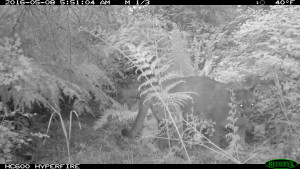 Unfortunately, halibut season had just started, so it was a couple more days before a warden made it out. It was too late for a cage trap, he said — the carcass was starting to rot. He told us that we should keep checking the camera, and let him know when the cougar resurfaced.

In the meantime, see to our fences.

We had taken advantage of the “safe” time after the cougar took Minnie to set up a gate in the shed, so we could lock our two remaining boys in at night. That was fine in the short term, but in the long-term the only answer was a really good fence.