Who is to blame? This is an interesting question, because it is asking more than “who caused this?” – it is asking “who is at fault for this?”

It is interesting from a writing standpoint because blame very often has a load of anger attached, and the finger of blame is not always reasonable in selecting a target. In other words, it is a prime way of adding conflict to a story.

Have something unfortunate happen. Have one character blame another for it. Good – conflict!

Have one character blame another for it unfairly. Better – more conflict!

Not only can it add conflict, it can also expose information about the characters involved: how the culprit is determined, how the wronged party behaves towards the culprit, and how the culprit responds – all great stuff!

This came to mind because of an incident last night.

Rob and I had a dinner gathering for the first time in our new/old house. We have had a few people swing by, but this was the first time we were trying to feed multiple people at the same time, and in style. All rather stressful to start with, since we don’t have a lot of practice entertaining.

So I was in the kitchen, trying to get the last few things ready. Rob was showing most of the guests around outside, and I was chatting with one guest while I worked.

Through the kitchen window I saw a dog streak by. Rather worrisome, because one of my cats was outside, and we don’t usually get dogs.

I commented on it, and the guest said “Oh, that’s Tim’s dog.”

One of the guests had brought a dog? News to me.

The crew stayed out an unexpectedly long time, and when at length they came in my sneaking fears were realized: the dog had treed my cat.

Forty feet up a Douglas Fir.

I was not happy.

I didn’t do anything regrettable, but I left Rob to keep everyone entertained while I went out to see whether I could lure Avanti down.

Already, the finger of blame was looking for a target, never mind that I wasn’t about to give voice to it.

The obvious person to blame was the guest in question, the “gentleman friend” of one of our friends. He seemed like a prime candidate, because it was his dog, and he might or might not be around for the long term.

Note that it is very convenient to blame someone if there isn’t a major cost to blaming them.

Avanti came down by a couple branches in response to my calling, but didn’t make it any further. Rob brought the ladder and helped me put it up in the fading light, but it was a good ten feet short. I reluctantly went back in, since there was nothing I could constructively do.

As it turned out, Avanti made it down just fine all on her own, after I “abandoned” her. This story has a happy ending, so there is no need for me to pin blame on anyone. Note how the lack of consequence lightens the load of blame to almost nothing.

But what if she had fallen? Been seriously injured? Killed?

Then the finger of blame would anxiously seek out a victim.

It is interesting to look at this as an example, and consider different interpretations – and who might pick one or another.

Here are the prime candidates:

This is where it gets interesting, because there isn’t necessarily a right answer. There are more and less rational answers, but there is some basis for any of these interpretations.

And this is where a writer can have some fun, depending on the desired level of conflict and/or character exposure desired.

Rob is to blame. He gave permission for the guest to let the dog out, without first checking on the situation. Yes, the guest indicated that the dog didn’t chase things, but almost any dog will chase a critter that runs from it.

I am to blame. I should have seen the situation and prevented it from happening. This is probably how I would have played it if something dire had happened, because I have a lot of trouble blaming other people if they blame themselves (which Rob would have done). From a writer’s standpoint, this is probably the least satisfactory, since most of the conflict would be internal. It could be useful from the point of view of exposing character, but that’s about it.

The dog is to blame. In this case the dog was just doing what dogs do, but then a dog that gets in and kills chickens or somesuch is still doing what critters do, and it doesn’t necessarily prevent the humans from holding the critters accountable.

All of this can be interesting, but I think the majority of readers would view this interpretation as unreasonable, at least in a case like this.

Avanti is to blame. She shouldn’t have run. The fact that she ran triggered the whole incident.

This is a good choice if you want to say something very specific about the character involved. It takes a certain sort of person to blame the victim – although more people are likely to do so if they are the obvious alternate culprit.

The guest is to blame. It was his dog. Yes, Rob gave him permission, but the guest said that the dog didn’t chase things. He was mistaken.

This is a nicely defensible position, and in this case it also has the benefit of blaming the outsider in the group. Always a favorite!

This has conflict potential either if there is a nice blow-up at the party, or if the guest actually stays in the story. It could become a nice point of friction with the friend who brought the gentleman-friend in the first place.

With all of this, there are a few key points: who is blamed, how much emotion is behind the blame (which is likely to influence how reasonable the blame is), how the emotion is acted on, and how the blamed party responds.

This can get especially dramatic if it is a group of people (ethnic, cultural, political) that is blamed instead of an individual.

All sorts of fun things to play with – and a potentially valuable exercise for my own writing, since I’ll be working on upping the conflict level in Joining the Draken over the next couple months.

Hmm. What can I come up with that will cause a nice storm of blame?

I like all the seasons, but I especially love the burgeoning life of spring.

Those first dainty crocuses and daffodils are as welcome to me as a garden full of roses.

Our plum trees are all in bloom, and the cherries will be joining in the fun within the next week or two. 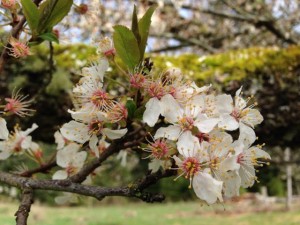 I have been hard at work getting a garden set up, since this is our first spring in our new/old house.

There was a garden here before. We started out by digging flagstones out of their layering of sod. A previous owner had used them to divide the flower beds, and we decided they were far too good to just bury with the load of topsoil we had ordered — and so the hard labor began!

And then the bulbs started coming up, the last remnant of the old garden that had survived a decade or more of neglect and mowing.

Irises, daffodils, and grape hyacinths – and of course I had to save a selection, in case there was anything special!

I get carried away with such projects, but I find it very therapeutic working outside, grubbing in the dirt.

It has been a welcome therapy, since work has been crazy, compounded by wedding planning and other adult pressures. Ah, tax season!

This last week or so the garden has really started coming together. The first bed is pretty well done, and I have been planting seeds like mad.

When I went through this process in Seattle, I stuck in a bunch of perennials right away, but without time to plan. This time around I think I’ll go primarily with annuals the first year, to give myself a chance to plan out the garden a little more thoroughly – while still having color this summer!

I find the nursery seed section far too seductive. At this point we have about two dozen packets of seeds, which in combination would probably cover 10,000 square feet of garden.

But how can I resist them?

The packets are lovely, the plants they will grow are lovely, and when else can you put a funny-shaped rock into the ground and expect a green thing to sprout? Magic! 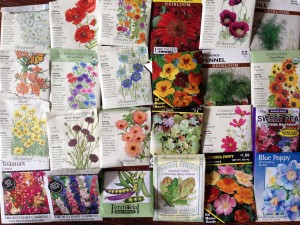 It has me in a thoughtful mood, because I am now the age my mother was when she had me.

It is a milestone, but not one of the loaded decade milestones.

My life is in a good place right now. I like my job and where I live. I’m engaged and will be getting married in September. Things are crazy now, but in a couple weeks when things get back to normal I’ll have time for writing and gardening.

I’m in a good place, and it is the first time in a while that I have been able to look forward a couple/few years and have some sense of where I will be.

And where I want to be.

In five years, I want to be happily settled with Rob, with one or two too many projects percolating.

I want to be writing regularly, and submitting regularly. I would like to have been published – ideally a novel, but I’ll take some short stories!

I want to have a garden, but have it set up so that it doesn’t eat all my free time in the summer.

I want to travel a couple times a year, but do it little enough that it’s still fun.

I want to continue to balance my day job with writing and my hobbies. It is stimulating and interesting, and I think my life would be less without it.

There are some major things I’m not sure about.

My mom had me at 36. At this point it is highly unlikely that I’ll have a kid at 36. Will I have kids at all? I’m ambivalent. I think I could be very happy with kids, or very happy without kids. I’m not sure how that will fall out yet.

Regardless, I hope that the next thirty-six years will be as interesting and generally happy as my first thirty-six – and that even if I don’t have children, I will have something to show for my time when I’m seventy-two.

I am an inveterate note jotter. I keep a big stack of scratch paper by my desk, and the heap of notes slowly grows next to my keyboard.

I prefer physical notes to an electronic list – except that organization is a problem.

Here is what my desk looked like last week: 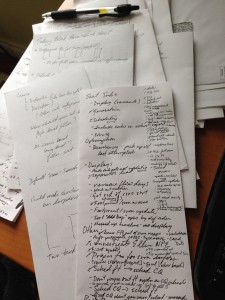 I like the idea of bulletin boards, but they take up a lot of real estate. I wanted something long and narrow.

Not too long ago, I was playing around with rare earth magnets and established that I could stick them to the nails in the wall studs. Ooh! A possible organization method! Not enough studs around my desk, though, and I wasn’t sure that the connection would be strong enough for a wad of notes.

So I looked up metal strapping online . . . and discovered the joy that is plumber’s tape!

It is cheap, it is readily available, it’s kinda pretty (it has a series of holes punched into it), and it works with magnets!

A bit of paint and a few screws later, and here is my new bulletin board: 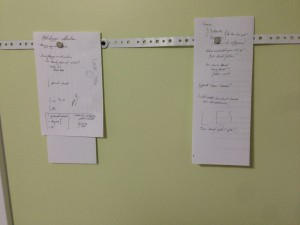 It could use a bit of prettying up, and it isn’t fully loaded yet, but I’m pretty excited about it.

Perhaps my days of desperately shuffling through my stack of notes is over!

A girl can hope.