Last night Rob and I went to Free Solo, a documentary about a climber who climbed El Cap without a rope.

It is fascinating, because it shows a very different perspective on risk and fear and death. It’s the sort of perspective that it’s interesting to collect.

I was a gym rat climber for several years, enough that I know climbing technique and can appreciate the skill — and difficulty — involved in something like this. But as a gym rat climber, I dismissed free solo climbers as being nuts. It seemed so needless.

Having gotten a glimpse into this guy’s world, I will revise my opinion: they may not be nuts, but they have a very different way of assessing risk and whether it’s worth it.

It isn’t that this guy doesn’t see the risk. He does. But for him it is a small risk (ha!) with a very high consequence. And to be fair, he does work to make that risk as small as he can, but that doesn’t take the high consequence away.

One of his friends likened it to someone going for Olympic gold, where you would either get gold or you would die. That seemed apt.

Most people would not take that challenge, but it is fascinating to see someone who will accept the challenge, and recognize that he has a lot in common with adventurers and explorers through the ages.

The part that was hard for me wasn’t actually that he was risking his life, but that he was risking the life that others hold dear. I felt bad for his girlfriend (yes, she knew he was into this, but still!), and even the film crew — who were also his friends, and were all too conscious of the possible outcomes.

Watching their fear made it seem real in a way that his own outlook did not.

So, an interesting study on risk, mastery, and how to reflect difficulty in a specialized domain.

A fourth hard freeze in a row, without an intervening thaw, has our landscape covered by delicate ice crystals. Each day they get a little bigger.

Today, for the first time, I felt that a sense of scale was needed. 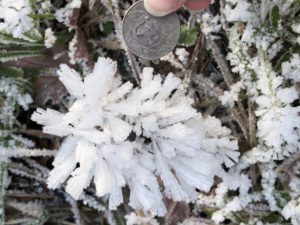 This is not false scale. The ice crystals really are that big — although admittedly these were some of the largest in the landscape.

They grow very differently on different surfaces, which makes for some neat contrasts. 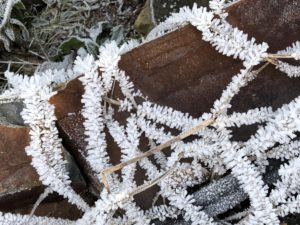 It is also fun to observe day-to-day changes.

In principle they are the same, but all the ice crystals are just a little bigger, a little more compounded.

I am enjoying the frost, but I’m also looking forward to the thaw we’re expecting tomorrow afternoon. The layer of ice and the cold are hard on the wildlife.

I put the hummingbird feeder back out on day 2, and two hummingbirds are still around. I had to thaw the feeder out mid-morning today, which gives some sense of just how frigid it is, given that hummer water is usually good down to 27-28F.

Soon it will be back to rain. 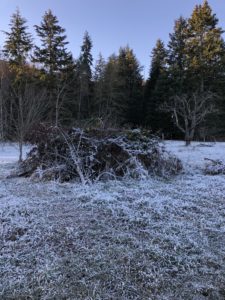 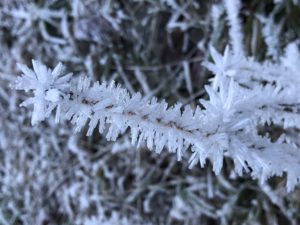 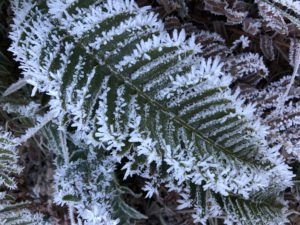 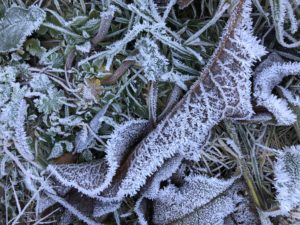 We had a very mild autumn, but last time we got our first truly hard frost. It went down to 27F last night, and the humidity was high enough for some fairly spectacular frost this morning.

In addition to the lovely gallery of Jack Frost’s work in the garden, there was a special treat close to the road: a frost flower. These are formed of fine tendrils of ice extruded from dead/rotten sticks when conditions are just right. It requires the perfect combination of temperature, moisture content, and pores in the wood.

This isn’t an especially spectacular example in terms of form, but the hair-like crystals were close to an inch long.

Frost flowers can be very beautiful. This is one we saw near the Elwha River almost four years ago. It was one of more than a dozen frost flowers we saw at that location, and the most picturesque. It was the first time we had ever seen them, and the conditions at the old campsite must have been perfect to have so many in one spot.

This weekend was a bit of a bustle.

I had a friend’s holiday open house on Saturday — in Black Diamond, almost three hours away! — so I combined that with a work visit to SeaTac and a visit to Mom and Dad.

Living out here has required some adjustments. To avoid missing out, I have to commit to doing things in spite of the drive; to avoid killing myself, I have to be sensible about minimizing trips.

It worked out well. I had a nice little visit with Mom and Dad, including a nice walk down to Titlow Park before heading to the open house on Saturday. 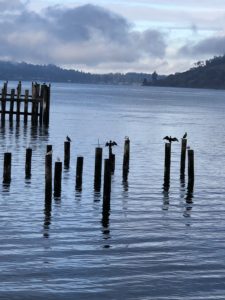 Here, cormorants hang out their wings to dry. Unlike most shore birds, they don’t have oil to keep their feathers dry.