Well, it has been quite a year!

It has been a wonderful year, with plenty of projects and nuttiness and joy, plus a smattering of sorrow to remind me to appreciate the joy.

I started off the year well. I finished up revisions for Joining the Draken, and sent it off to some of my Viable Paradise friends to beta in the spring.

The feedback was generally encouraging and extremely helpful. It clarified that I needed to strengthen the main arc quite a bit, and work on my tension and conflict throughout the story.

I had hopes of working on revisions in the summer, but I ran into two things: work was unexpectedly nutty, and I had a wedding to prep for in September. I underestimated both!

I wound up setting writing aside while I saw to the rest of my life.

It has been a pleasure getting back to it. I’m now in late-phase revisions, having been working along on it since October. I’m tweaking a few structural things and stitching things down a little more. I’m hoping to have it ready to query by the end of February.

I’m anxious to get back to the first draft of a thief story that I’ve been sitting on for almost two years now!

I went to my first writing conference in June: Fourth Street Fantasy.

It was wonderful fun, although I had to get up early to work for my day job each day, which prevented me from fully enjoying the evening revelries.

Still, I enjoyed the panels enormously, and it was lovely to catch up with my writing friends and make some new ones!

Settling into a new (old) house is a lot of work! But it is – mostly – a pleasure.

Stripping floors is not one of the pleasures.

We were told that our upstairs fir floor – painted a glorious blue-gray in the 1920s – wasn’t “floor” grade, and so couldn’t be sanded down. I had the brilliant idea of stripping it with a nice safe stripper that I had used before. 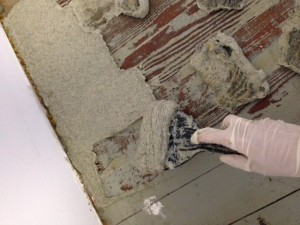 We got it done, but I think I would not make the same decision, given the chance again.

Fortunately most other things are in good shape, so we haven’t needed to do much inside.

So, starting in the spring, most of my attention was outside.

We got a package of bees in mid spring.

It was pretty exciting getting them installed. I had had bees once before, but that was from a captured swarm. This was my first time installing a package. 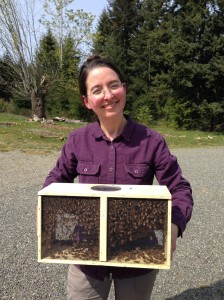 The girls got settled in quickly. I saw some out on our dandelions the next morning.

Having bees has definitely changed my feelings towards dandelions! They are a good, long-blooming food source for the girls. 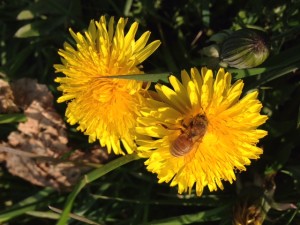 It was especially fun seeing them on the flowers in the garden through the summer. The Cosmos and poppies were especially popular.

The girls are all tucked away for the winter now. We just have to trust that they are keeping warm, and that they will come buzzing out on the first warm day.

I had a big (overly ambitious) garden in Seattle, and spent a huge amount of time working in it.

I have every intention of doing the same in Port Angeles. It’s my stress relief!

So I spent a fair chunk of time this spring getting a basic garden in.

Our soil is super rocky, so we decided to get a bunch of topsoil in, and form it into beds. 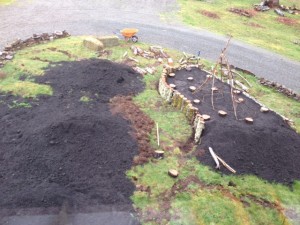 Much shoveling and hauling of logs later, and the beds started to take shape: 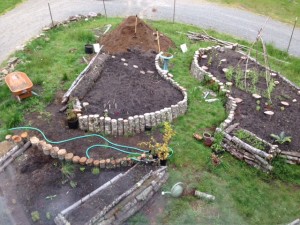 I like the log bed-edging, although it takes an amazing number of logs. Fortunately our alders needed thinning, and so we were able to take out a few trees without impacting the woods.

By late spring the garden was starting to look like something. I went with annuals galore, so that I could have greenery and color while I figure out the weather patterns and sun here. 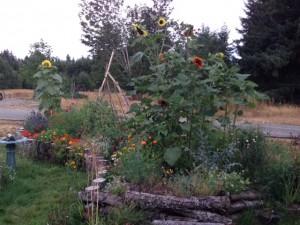 Fortunately the garden largely took care of itself through the summer (aside from watering), because by that time I was getting pretty preoccupied with wedding stuff.

Weddings are a pain. I had heard they were a lot of work, but I assumed that was just if you got carried away with it.

Or maybe I’m susceptible to getting carried away with it, after all!

It came with a lot of fun projects, though, from making cyanotypes to use as the basis for our invitations 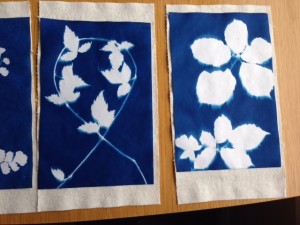 to making a bunch of fruit wine to serve at the reception. 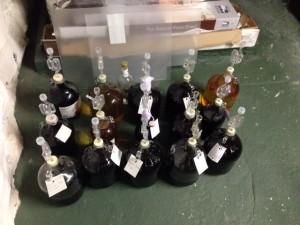 Of course, most of the fun stuff for the wine happened in 2014; bottling is a lot of work, but isn’t exactly fun.

So all of that was going pretty well.

But I didn’t want a “standard” wedding dress. I wound up getting a knockoff of Audrey Hepburn’s Oscar dress. My mom helped me alter it, and then I added silk draperies to make it look a bit more dressed up. 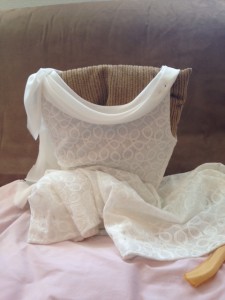 I was pleased with how it came out, but it was a lot of work! Fortunately, that also meant a lot of quality time with my mom.

Work continued to be nutty, which meant that my August was really nutty when wedding stuff was packed on top.

But I survived, and the wedding went well! 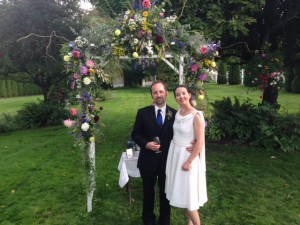 It was a bit of a blur, but a happy blur.

And then it was off to Australia!

We had a wonderful – and much-needed – honeymoon in Australia.

We mostly stayed in Queensland, home of the Great Barrier Reef and tropical rain forests. 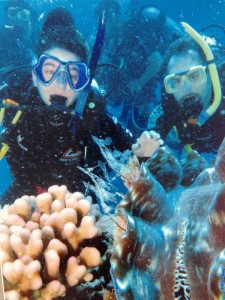 It was especially neat to see a Cassowary in the wild. They are the closest surviving relatives of the Velociraptors – and although they are fruit eaters, they could disembowel someone quite handily. 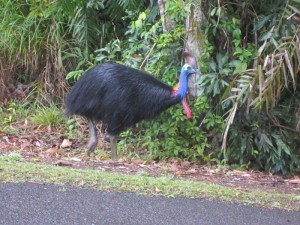 We were there for almost three wonderful weeks.

We were sorry to leave, but also glad to be home. The perfect trip!

Most of the year’s otherwise minimal sorrows related to my kitties.

Dulcie, the sweet quiet one, got a hernia. Better than the tumor I had feared, but she turned out to be a stitch-biter (as I discovered thirty seconds after taking this picture). 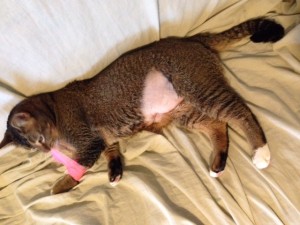 She had to spend two weeks in the collar of shame. I’m really not sure how that would have worked if I hadn’t been able to work from home!

That was tough, but the real sorrow came in the fall, with the death of her sister Avanti.

Avanti had always been an adventurous kitty. She disappeared when she was visiting my parents. Animal control found her sad remains about a mile away, dead by car. 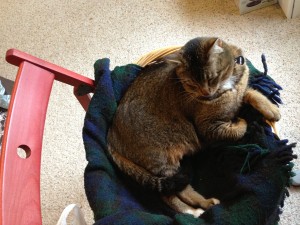 I suspect she hopped in a neighbor’s car (as she was wont to do) – but this time I think they drove off with her by mistake. They probably let her off when they found her, quite possibly within half a mile or so – but she wouldn’t have known how to get home.

It was really sad to lose her, and I still have the occasional pang. However, she wasn’t a kitty who could ever have been indoor-only, so I comfort myself with the thought that she had a good and happy life, and got to be herself.

Dulcie is enjoying being the only indoor cat for now. Avanti and she were friendly, but Avanti was quite dominant, and I’m sure Dulcie got tired of being pushed around.

Now it’s just Dulcie and Vinnie, the old barn cat who came with the house. He’s super sweet, but he sprays, so Dulcie is safe from him as well.

And now a new year is upon us.

I hope to get Draken out the door, and Thief revised.

I hope to expand the garden and get some perennials in.

We are thinking of getting a couple more packages of bees. If our hive survives the winter, we’ll be looking at three hives next year.

We will probably get a kitten in the spring. Rob keeps making noises about Maine Coons.